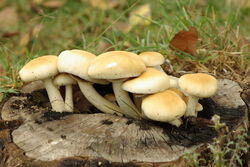 Agrocybe aegerita has a mellow and attractive flavor when young. Agrocybe aegerita grows prolifically on deciduous wood debris, often forming large clusters - both in nature and in the controlled environment of the growing room. This species is an excellent candidate for stump recycling, especially in the southeastern Uninted States.

This species can be fruited on supplemented oak and alder sawdust/chips. Willow, poplar, cottonwood, and maple also support substantial fruitings.

This mushroom benefits from the application of a 1/2 inch casing directly onto the top surface layer of mycelium. However, if a condensing fog environment is provided, combined with high turbulence, an even plane of primordia can form absent any casing layer.

This species figures as one of the best for recycling stumps in the humid southeastern Uninted States. The willow-populated swamps of Louisiana seem like an ideal setting for the deliberate cultivation of A. aegerita. Regions of Chile, Japan, and the far East, as well as southern Europe have coincident weather patterns that should support growth.

Retrieved from "https://mycology.fandom.com/wiki/Agrocybe_aegerita?oldid=3839"
Community content is available under CC-BY-SA unless otherwise noted.