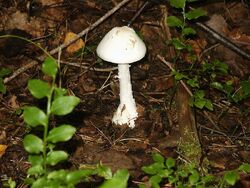 Amanita bisporigera is among the deadliest mushrooms on earth and contains enough toxins to kill a healthy adult with just one bite.

Amanita bisporigera and Amanita phalloides (the death cap) are responsible for the overwhelming majority of deaths due to mushroom poisoning. The toxin responsible for this is amatoxin. Symptoms do not appear for 5 to 24 hours, when the toxins may already be absorbed and the damage (destruction of liver and kidney tissues) done.

Amanita bisporigera cultivation in a lab environment has been uncommon if not impossibile due to the symbiotic mycorrhizal relationship of this mushroom to its host trees.