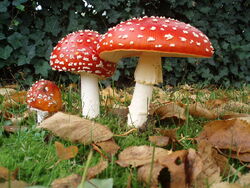 Amanita muscaria, commonly known as the fly agaric or fly Amanita is a poisonous and psychoactive basidiomycete fungus, one of many in the genus Amanita. The quintessential toadstool, muscaria is a large white-gilled, white-spotted, usually deep red mushroom, one of the most recognizable and widely encountered in popular culture, owing to its iconic and easily identifiable appearance.

Amanita muscaria cultivation in a lab environment has been uncommon if not impossibile due to the symbiotic mycorrhizal relationship of this mushroom to its host trees.

Amanita muscaria is native to birch, pine, spruce, fir and cedar woodlands throughout the temperate and boreal regions of the Northern Hemisphere, including high elevations of warmer latitudes in regions like the Hindu Kush, the Mediterranean and Central America.