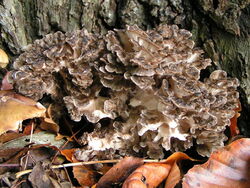 A large, fleshy polypore, dark grey/brown when young, becoming lighter gray in age. (Some varieties fade to a light yellow at maturity). Fruit body is composed of multiple, overlapping caps, 2-10 cm. in diameter, arising from branching stems, eccentrically attached, and sharing a common base. Young fruitbodies are adorned with fine grey fibrils. The pores on the underside of the caps are white.

Supplemented hardwood sawdust, particularly oak, poplar, cottonwood, elm, willow, and alder. Alder and poplar stumps are less likely to support outdoor fruitings, given the hold competitors like Pleurotus ostreatus and allies have on that niche. For indoor cultivation, yields vary substantially between various wood types. Oak is generally preferred, although strains growing on conifers are being developed.[1]

The species is native to the northeastern part of Japan and North America, and is prized in traditional Chinese and Japanese herbology as an adaptogen, an aid to balance out altered body systems to a normal level.

Retrieved from "https://mycology.fandom.com/wiki/Grifola_frondosa?oldid=3442"
Community content is available under CC-BY-SA unless otherwise noted.