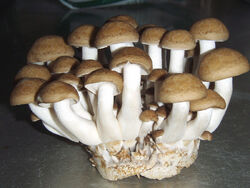 Hypsizygus tessulatus falls under the umbrella concept of the Japanese "Shimeji" mushrooms. Firm textured, this mushroom is considered one of the most "gourmet" of the Oyster-like mushrooms. Recently, this mushroom has been attributed to having anti-cancer properties. Increasingly better known, this obscure mushroom compares favorably to Pleurotus ostreatus and Pleurotus pulmonarius in North American, European and Japanese markets.

This species performs best on supplemented sawdust. Good wood types are cottonwood, willow, oak, alder, beech, or elm. The effectiveness of other woods has not yet been established.[1] It seems that straw does not provide commercially viable crops unless inoculated up to 25% of its weight with sawdust spawn.

Hypsizygus tessulatus sometimes appears alone, but is usually in dense clusters of seven or more individuals; often on poplars or maple, but occasionally found on beech, birch, elm or fir; sometimes in large groups high in the crotch of a dead tree, or in smaller groups on dead stumps or logs. This species common in Pacific Northwest.