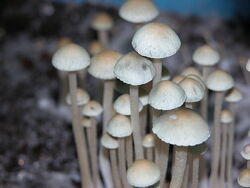 Cyanescens is a species which have been commonly cultivated indoors (in an artificial environment) and outdoors.

Panaeolus cyanescens perform well with a combination of grain and manure substrates, but also grow well on straw.

This species must be cased in order to fruit properly, but is otherwise considered easy to cultivate. Experience suggest that a thin casing layer (ie. 1cm thick) of pH balanced peat moss and vermiculite performs best.

Panaeolus cyanescens is a dung-loving species which grows in tropical and neotropical areas in both hemispheres. The fruit bodies grow solitary to widely scattered or in groups on or near dung in pastures. It has been reported in Hawaii, Louisiana, Mississippi, Florida, Texas, Australia, India, Mexico, Bolivia, the Philippines, Thailand, France, Brazil, the coastal regions of South Africa, and is probably more widely distributed.

Cultivation, consumption and the law[]

Because of the hallucinogenic chemicals panaeolus cyanescens manufacture, they are illegal to cultivate or posess since psilocybin and psilocin are listed as Schedule I drugs under the United Nations 1971 Convention on Psychotropic Substances.