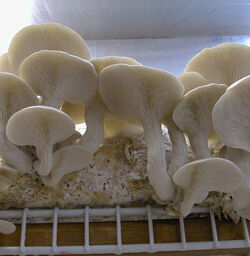 Pleurotus ostreatus, the pearl oyster mushroom, is a common mushroom prized for its edibility. Long cultivated in Asia, it is now cultivated around the world for food. It is related to the similarly cultivated king oyster mushroom, pleurotus eryngii. Oyster mushrooms can also be used industrially for mycoremediation(pollution negation) purposes.

Oyster mushrooms are known for growing on a wide range of substrates. A wide array of agricultural and forest waste products can be used, including but not limited: straw (wheat, rye, oat, rice, and barley straw); corn stalks, sugar cane bagasse; coffee pulp; banana waste; cotton waste and cottonseed hulls; hardwood sawdusts; paper by-products; soybean waste; palm oil by-products; agave waste; and even the pulp remaining from tequila production! The pH at make-up can vary between 6.0-8.0 but should fall to an optimum of 5.0 at fruiting for maximum biomass production.

Like many other "oyster" mushrooms, Pleurotus osteatus is highly sensitive to the carbon dioxide levels of the air. Unless CO2 levels are reduced to less than 1000 ppm (.01%), noticeable malformations of the fruit bodies occur: typically long stems and small caps. It has been observed that the cap-to-stem ratio is an accurate measurement of atmospheric carbon dioxide levels in the growing room and is used as a visual cue by Oyster cultivators for increasing air exchange. [1]

The oyster mushroom is wide-spread in temperate and subtropical forests throughout the world. It is a wood loving species that acts as a primary decomposer on deciduous woods, particularly beech. The species, however, is usually is not fussy where it grows with the notable exception of coniferous needles.

Retrieved from "https://mycology.fandom.com/wiki/Pleurotus_ostreatus?oldid=3853"
Community content is available under CC-BY-SA unless otherwise noted.