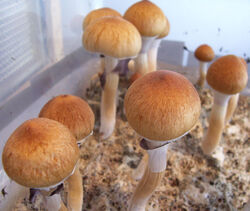 Psilocybe cubensis is a coprophilic fungus (a dung-loving species) that often colonizes the dung of large herbivores, most notably cows and other grazing mammals such as goats. It prefers humid grasslands and has been found in tropical and subtropical environments. In the US, it is sometimes found growing wild in the South, generally below the 35th parallel. It has been found in modern times in the highlands and river valleys of Argentina, Colombia, Ecuador, Peru and Venezuela in South America. It has also been found throughout Thailand, Cambodia, India, South Africa, and Australia. Psilocybe cubensis can be found where humidity is above 85% a lot of the time, and where grass-eating mammals are. The reason cubensis grows commonly on the dung of these animals is because they have no or very little stomach acid. The cow eats feed with mushroom spores on it, and the spores germinate in the cow's moist, warm stomach. No, cubensis is not found under cow patties, and you should not consume anything you find under cow pies. Cubensis can be found within a few hundred miles of the Gulf Coast reliably, especially in fall and spring, all the way from Galveston, TX to Miami, FL. as far north as middle Tennessee. Note though that after 11 years of diligent wild hunting, I've only found cubensis in TN twice. If you hunt wild shrooms, make sure you are an expert at identifying mushrooms. What's the worst that could happen if you mis-identify? Your liver will shut down in a day or two, and you'll die of systemic ammonia toxicity and jaundice within a week or so. Yeah, you want to be careful. I also found it in New Jersey.

Since cubensis are a dung-loving species, they will grow exceptionally well on horse and cow manure, they will also produce well on many other substrates such as coconut coir, straw and whole grains. The PF tek, arguably the most popular growing technique for cubensis, allows a cultivator to get many flushes out of a substrate of vermiculite and brown rice flour.

Although cubensis cakes will benefit from a casing layer of vermiculite and are able to conquer a relatively deep one, they will fruit well without one.

Due to a note in Paul Stamets' book, The Mushroom Cultivator, the optimal colonization speed of cubensis was thought to have been reached at 86°F. Since then, independent testing has shown that 75-81°F (24 - 27 °C) is far more favorable for the species.

Cubensis are extremely resilient to various temperatures when they are in their fruiting stage, but like many other species, will produce higher quality, denser fruit bodies when lower temperature is maintained. Many have found that that the ideal fruiting temperature is between 68 and 72°F (20 - 22,2 °C).

Cubensis fruit best in a 100% humidity environment. Fruit bodies will grow in less than saturated air, but primordia will not form well. Cubensis will be far more resilient to changes in humidity if a casing layer is applied.

Cubensis is the most popular psychoactive mushroom among hobby cultivators due to the the ease with which it can be grown. The PF tek, a famous mushroom cultivation method, was originally designed with this species in mind. Cubensis produce a very rhizomorphic mycelium and will fruit well on a wide variety of substrates without a casing layer.

Its major psychoactive compounds are:

Psilocin and psilocybin are substances isolated by Albert Hofmann in 1958 in a related and less potent species, P. mexicana. All four compounds are presumed hallucinogenic, though it is suspected that baeocystin and norbaeocystin are less psychoactive than psilocybin and psilocin.

Individual brain chemistry and psychological predisposition play a significant role in determining appropriate doses. For a modest psychedelic effect, a minimum of one gram of dried cubensis mushrooms is ingested orally. 0.25-1 gram is usually sufficient to produce a mild effect, 1-2.5 grams usually provides a moderate effect. 2.5 grams and higher usually produces strong effects [2]. For most people, 3.5 dried grams (1/8 oz) would be considered a high dose and likely to produce an intense experience. For many individuals doses above 3.5 grams rapidly become overwhelming. For a few rare people, doses as small as 0.25 grams can produce full-blown effects normally associated with very high doses. For most people, however, that dose level would result in virtually no effects.

Effects usually start after approximately 20-60 minutes (depending on method of ingestion and what else is in the stomach) and may last from four to five hours, depending on dosage. Hallucinatory effects often occur, including walls that seem to breathe, a vivid enhancement of colors and the animation of organic shapes. At higher doses, experiences tend to be less social and more entheogenic, often intense and spiritual in nature.

Many people microdose psilocybe mushrooms and report that it helps relieve depression, anxiety and other mood disorders, while also increasing creativity. A microdose is roughly one tenth of a normal dose, usually between 0.05 grams and 0.1 grams, and is not enough to produce psychedelic effects. The microdose is taken two to five times a week and is sometimes combined with various supplements.

It's nearly impossible to overdose on Psilocybe mushrooms since one would have to consume nearly their entire body weight in fresh mushrooms or ≈1680g of dried mushrooms[3]. Nevertheless, the effects of very high doses can be overwhelming. Depending on the particular strain, growth method, and age at harvest, Psilocybe cubensis mushrooms can come in rather different sizes. It is recommended that one weigh the actual mushrooms, as opposed to simply counting them.

People taking MAOIs need to be very careful, as psilocybin and psilocin are metabolized by the enzyme monoamine oxidase. An MAOI reduces the body's ability to handle the mushrooms (roughly doubling their potency), and can lead to an unpleasant, prolonged, or dangerously strong experience.