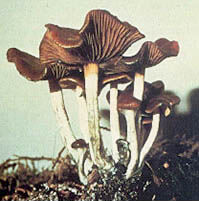 Psilocybe cyanescens are widely scattered to densely gregarious on woodchips, sawdust, mulch, and humus, and on lawns rich in lignin; partial to coniferous debris, but fond of alder and eucalyptus. It is fairly common in the San Francisco Bay Area in cold weather (mainly December and January, though in favorable conditions fruiting as late as March),especially in landscaped areas and mulched flower beds, and is also fairly common in Oregon, Washington, and British Columbia. The season in the Pacific Northwest is earlier and more brief than in California, typically September and October only.